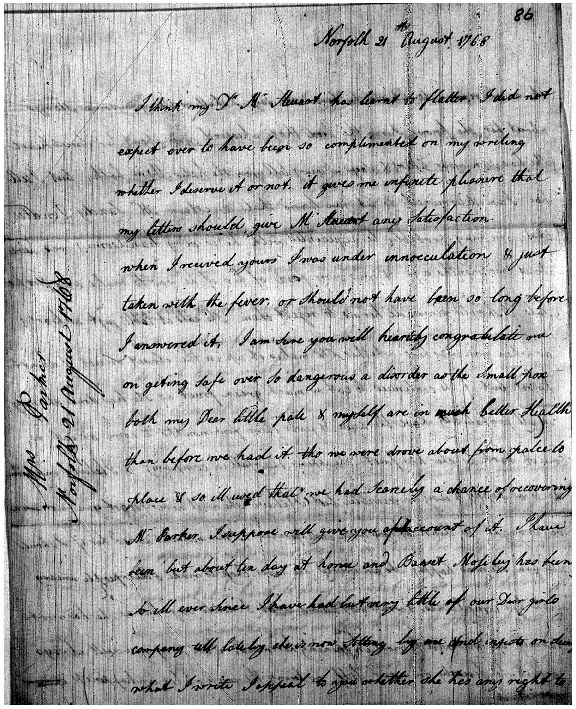 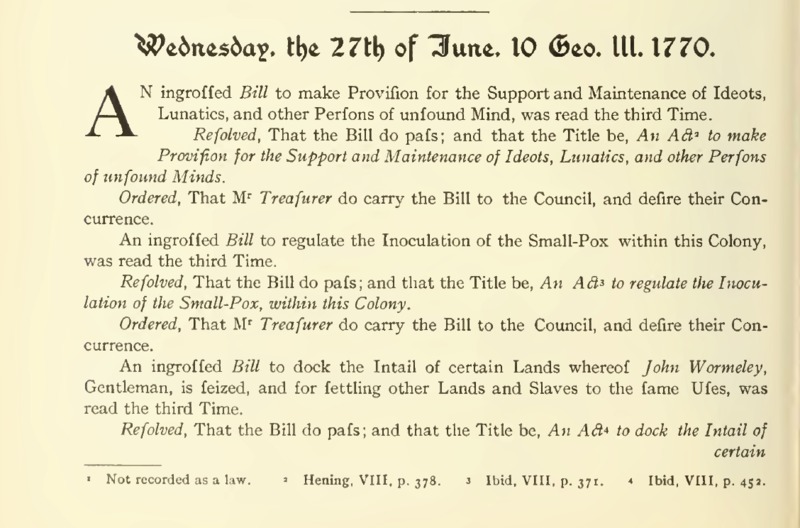 An excerpt from the Journal of the House of Burgsses of Virginia that contains the resolution of the Bill to Regulate the Inoculation of Smallpox, within this Colony [Virginia].

Smallpox is a virus that ravaged the Western world in the seventeenth and eighteenth centuries. While the virus was not an endemic problem in the American colonies, it was brought over to port cities by sea travelers carrying the virus. A method of smallpox treatment at the time (the 1760s) was inoculation – exposure to a virus via variolation, a technique where a pustule sample from an individual with smallpox was taken and was placed in a cut of an uninfected individual. The technique was introduced to the British world by Lady Mary Wortley Montagu, a British aristocrat and poet who was exposed to the technique in the Ottoman Empire and inoculated one of her children in Britain in 1721. The technique was studied and accepted in England, where smallpox was a much greater problem.

In the American colonies, however, inoculation was not so well received. Many feared that inoculation against smallpox would end up spreading the disease instead of preventing its spread. Many also believed that smallpox outbreaks were punishments by God, and that inoculation was a method of avoiding punishment and was thus against his will.1 Major outbreaks were seen in port cities in the American colonies, including Boston (1721), Charleston (1738 and 1760), and Norfolk (1769). Several laws were crafted after smallpox outbreaks in response to the use of inoculation, usually to ban the practice.

Norfolk is a port town located in southeastern Virginia, along the Chesapeake Bay. In 1768, Dr. Archibald Campbell hired Dr. John Dalgleish to inoculate several families in Norfolk, VA, including the families of future mayor Cornelius Calvert and of Scottish immigrant James Parker.2 Following this, Dr. Dalgleish published an article in Purdie and Dixon’s Virginia Gazette (4/14/1768) discussing the dangers of smallpox and the successes that he had with inoculation.3 The men faced backlash from the community, but continued. On June 25th, those being inoculated were moved to Dr. Campbell’s plantation. Anti-inoculationists, led by Joseph Calvert, mobbed Dr. Campbell’s house on June 27th, driving the patients away to a pest house.4 Charges were brought against those in the mob, but many escaped paying fines. Tensions remained well into 1769. In April 1769, anti-inoculationists brought charges of inoculation against Dr. Dalgleish, but the technique was not considered to be illegal at the time. When a ship owned by mayor Cornelius Calvert brought smallpox to Norfolk and Calvert had the survivors inoculated, another mob attacked Calvert's and Campbell’s houses. By June 27th, 1770, a bill regulating inoculations was enacted by the House of Burgesses of Virginia, banning the act of inoculation in Virginia.2

By October 1769, charges were brought against Dalgleish and against the members of the 1769 mob. In 1770, with Thomas Jefferson as the prosecution and Thompson Mason as the defense attorney, only several members of the mob were found guilty.5 After the cases, Dalgleish faced more legal troubles in Norfolk, before dying in 1771. Over the course of the riots and the court cases, James Parker became less sympathetic toward the colonists, completely shifting his loyalties to the Crown and returning to England for a time.6

One of the first scholars to analyze the riots was Patrick Henderson. In 1965, he brought up the argument that the tension behind the Norfolk riots had less to do with inoculation and more to do with the rising tensions between the colonists and the Crown. Henderson made the argument that the pro-inoculationists are loyal to the Crown (he calls them Loyalists), and that the anti-inoculationists were patriots. However, his argument is so focused on the patriotism felt by the colonists that he neglects most other potential factors in the development of the riots. The goal of this project is to do a comparative analysis of the Norfolk anti-inoculation riots to the smallpox outbreaks in Boston (1721) and Charleston (1738 and 1760), and use this comparison to analyze the validity of Henderson’s argument.